We anticipate a future in which humans and intelligent robots will collaborate on shared tasks. To achieve this vision, a robot must have sufficiently rich knowledge of the task domain and that knowledge must be usable in ways that support effective communication between the human and the robot. Navigational space is one of the few task domains where the structure of the knowledge is sufficiently well understood for a physically-embodied robot agent to be a useful collaborator, meeting genuine human needs.

We propose to develop and evaluate an intelligent robot capable of being genuinely useful to a human, and capable of natural dialog with a human about their shared task. This project is a collaboration between three accomplished research groups with overlapping as well as complementary areas of expertise.

The Hybrid Spatial Semantic Hierarchy (HSSH) is a human-inspired multi-ontology representation for knowledge of navigational space. The spatial representations in the HSSH provide for efficient incremental learning, graceful degradation under resource limitations, and natural interfaces for different kinds of human-robot interactions. Speech is a natural though demanding way to use natural language to communicate with a robot. To maintain real-time performance, natural language understanding must be organized to minimize the amount of backtracking from early conclusions in light of later information.

This project will answer three scientific questions. (1) Can the HSSH framework, extended with real-time computer vision, express the kinds of knowledge of natural human environments that are relevant to navigation tasks? (2) Can the HSSH representation support effective natural language communication in the spatial navigation domain? (3) Can we develop effective human-robot interaction that meets the needs of a person and improves the performance of the system?

We will perform this research with two different kinds of navigational robots, each learning from its travel experiences and building an increasingly sophisticated cognitive map: (1) an intelligent robotic wheelchair which carries its human driver to desired destinations, and (2) a telepresence robot that transmits its perceptions to a remote human driver as it navigates within an environment so the driver can achieve virtual presence and communicate with others remotely. To inform the design process, we will conduct focus groups with potential users. We will also evaluate our implemented systems throughout the process, creating an iterative design-test cycle.

Intellectual Merit: To be successful, an intelligent robot must not only be able to perceive the world, represent what it learns, make useful inferences and plans, and act effectively. It must also be able to communicate effectively with other agents, and particularly with people. This confluence among grounded knowledge representation, situated natural language understanding, and human-robot interaction is intellectually fundamental, and is the focus of our research project. Investigating this confluence requires a substantial knowledge representation, which we have for the domain of spatial mapping and navigation. Since the domain of spatial knowledge is foundational for virtually all aspects of human knowledge, we believe that its significance will be broad.

Broader Impact: The results of this project will create technologies for mobility assistance for people with disabilities in perception (blindness or low vision), cognition (developmental delay or dementia), or general frailty (old age). It will also support telepresence applications such as telecommuting, telemedicine and search and rescue. The project includes outreach to K–12 and community college students, K–12 teachers, and the public in a number of venues.

Our intelligent wheelchairs are named Vulcan, after the only Roman god with a disability. He was also said to be the first blacksmith, engineer, and roboticist.

Vulcan 1.0 was the Intelligent Wheelchair at the University of Texas at Austin.

Vulcan 2.0 is the Intelligent Wheelchair at the University of Michigan. 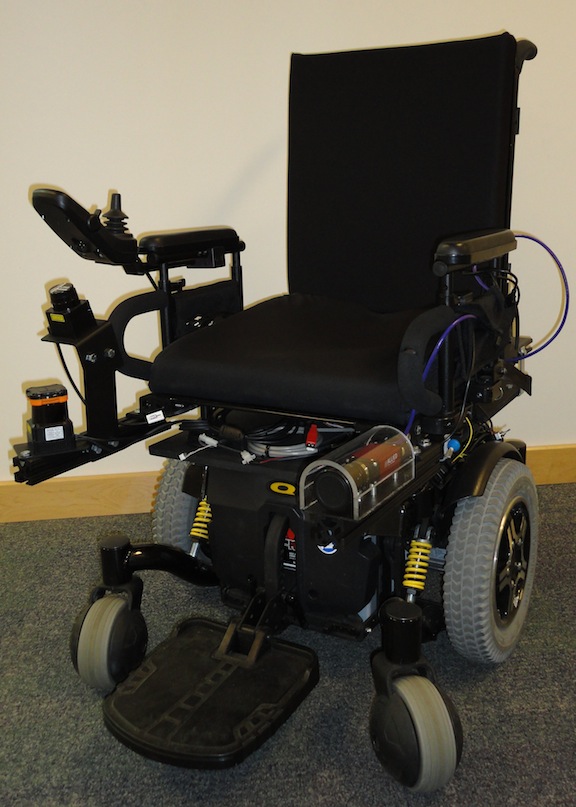 [If you are at the University of Michigan, these are available online.]

This work has taken place in the Intelligent Robotics Lab in the Computer Science and Engineering Division of the Electrical Engineering and Computer Science Department at the University of Michigan. Research of the Intelligent Robotics lab is supported in part by the National Science Foundation through: HCC: Large: Collaborative Research: Human-Robot Dialog for Collaborative Navigation Tasks (IIS-1111494)
Author: BJK