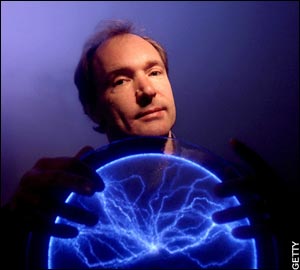 In 1989, while working at at CERN, the European Particle Physics Laboratory in Geneva, Switzerland,Tim Berners-lee proposed a global hypertext project, to be known as the World Wide Web. Based on the earlier "Enquire" work, it was designed to allow people to work together by combining their knowledge in a web of hypertext documents. He wrote the first World Wide Web server, "httpd", and the first client, "WorldWideWeb" a what-you-see-is-what-you-get hypertext browser/editor which ran in the NeXTStep environment. This work was started in October 1990, and the program "WorldWideWeb" first made available within CERN in December, and on the Internet at large in the summer of 1991.

Mr. Berners-Lee was the receipent of the following awards:

Link to this Page